View source
watch 02:56
Raise a Floppa - The Loop
Do you like this video?
Play Sound
This article is for the ability.
For the location, see Admin (location).

Views the locations for all players.
Admin is an ability in Among Us, which any player, including ghosts, can use to get information about other players' locations.

When in Admin (The Skeld, MIRA HQ and Polus) or Cockpit (The Airship), clicking the button next to the map will show what room everyone is in, anonymizing the players in yellow. The map updates when someone changes rooms but does not show exact positions. It also does not reveal location info for the corridors or Outside on Polus. Impostors that are in a vent and dead bodies are also shown on the map. It is mainly used to verify the location of a Crewmate or Impostor.

An illustration of Admin as seen in How to Play.

Admin on The Skeld during Comms Sabotaged.

Admin on Polus during Comms Sabotaged.

Admin on The Airship during Comms Sabotaged.

The panel used to watch Admin on The Skeld. 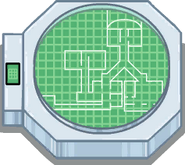 The panel used to watch Admin on MIRA HQ.

The panel used to watch Admin on Polus.

The panel used to watch Admin on The Airship.