Armory is a location in Among Us on The Airship.

Armory is a large room shaped like a backward "C". The floor is made out of wood in the upper section, with weapons displayed on the wall. There is also an exit that leads to a hallway. This hallway connects to Cockpit, Communications, and Engine Room. The lower section has a purple carpet with yellow outlines as the floor, with more weapons displayed on the wall, and an exit leading to Kitchen.

The non-interactable weapons on the panels are: Two golden guns, a red gun, a golden cannon (also from Henry Stickmin), three laser guns on the wall, more rifles, a sledgehammer, two nunchucks, twin sais, a staff, and a katana. 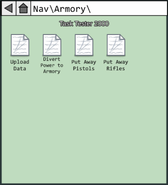 The Task Tester 2000 interface of Armory on The Airship.