17
Coral is one of the colors in Among Us that players can select and customize. It was announced as a possible color on April 20, 2021, in a tiebreaker vote against Olive, another possible color.[1] Coral received the most votes, confirming it as a new color. It was added to Among Us in version 2021.6.15. 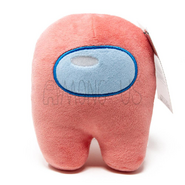 Promotional art of Coral stabbing Olive sent on Discord after the tiebreaker vote was decided.

The Coral emoji used in the Innersloth Discord server.

Coral being ranked in 12th place for the popularity ranking of the colors in Among Us.