View source
watch 02:59
Metroid Dread - The Loop
Do you like this video?
Play Sound

Crewmates, also known as Crewmembers or The Crew, are one of the two possible randomly assigned roles in Among Us.

There are two ways for Crewmates to win:

Impostors are primarily eliminated through ejection votes, but leaving, disconnecting, or being kicked also contributes towards the elimination goal.

The Crewmates are assigned a variety of tasks such as Fix Wiring, Upload Data, Fuel Engines, etc.

A Crewmate can use the report ability to report a dead body and bring the entire Crew and all Impostors into an emergency meeting to discuss who The Impostor may be. Impostors also have this ability. The report button appears above the use button.

A Crewmate can use for a variety of interactions. The most common interaction is to activate and complete tasks. Crewmates can also use the emergency button to call an emergency meeting manually when possible. Impostors also have use as an ability but cannot complete tasks with it. Use is in the bottom right corner of the screen, and can be replaced by Security, Admin, Vitals, or Doorlog when near the appropriate panel.

When An Impostor kills a Crewmate, their body drops to the ground, broken in half with a bone sticking out, and the Crewmate turns into a ghost, appearing next to their body. A Crewmate can freely move through walls in this state and can (and must) complete tasks to help the Crewmates win. Ghosts can communicate at all times through the chat, but their messages are only visible to other ghosts. They also cannot call emergency meetings or resolve Sabotages. Ghosts are not visible to players that are still alive.

Bodies of Crewmates will remain on the map until a body is reported or a meeting is called. If an eliminated Crewmate has a pet, it will stay on the spot they died.

The screen that shows when the Crewmates win.

The screen shown when the Crewmates lose.

An upside-down Crewmate in the Scan Boarding Pass or the Develop Photos task's photo.

A serious Crewmate in the photo.

A superior Crewmate in the photo.

A brave Crewmate in the photo. 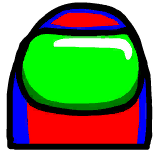 An imposing Crewmate in the photo.

A happy Crewmate in the photo. 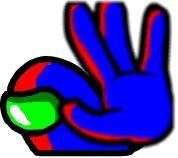 A Crewmate putting their hand over the camera in the photo.