View source
watch 02:46
The Quarry - The Loop
Do you like this video?
Play Sound
This article is for the reportable object.
For the role that dead players assume, see Ghost.

Where a Crewmate died

Reportable body left behind by An Impostor killing a Crewmate

Living players
Dead bodies are reportable objects in Among Us left when An Impostor kills a Crewmate.

Ghosts start their role on top of their dead body. They do not see it fall since the kill animation they are shown obscures this.

Dead bodies can be reported via the report ability by any living player. When close enough to the object, the report button lights up and can be pressed to start an emergency meeting.

Dead bodies still appear on Admin in the location of death. Also, dead bodies of players on the map are shown to flatline and are marked as DED on Vitals until the next meeting or the player leaves the game. When an emergency meeting is called, all dead bodies disappear, no longer show up on Admin, and can no longer be reported (on Vitals, they are marked as D/C). 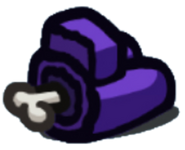 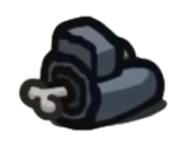 A dead body that has just been killed.

Orange's dead body in Security in How to Play.

Yellow's dead body in How to Play.

Purple's dead body in the background of artwork for Valentine's Day.