View source
watch 02:46
The Quarry - The Loop
Do you like this video?
Play Sound
This article is for the object.
For the Sabotage, see Door Sabotage.

Opens or closes to give or prevent access to another location.

Doors are objects in Among Us that, when closed, prevent players from entering certain locations. The doors on each map have different properties, such as whether they open automatically or manually, and serve different purposes, like being used by Impostors to trap Crewmates.

On The Skeld, doors may be closed by Impostors via Door Sabotage. Players are unable to open doors manually, as closed doors instead open 10 seconds after being Sabotaged or when an emergency meeting ends. Doors may be closed in: Cafeteria, Electrical, Lower Engine, MedBay, Security, Storage, and Upper Engine.

In Balcony, there are two sets of transparent glass doors that lead to Cafeteria. The doors will open automatically when a player gets close to them. Any sprite on top of the doors can be seen, regardless of vision.

On Polus, most doors may be closed by Impostors via Door Sabotage. Players can open these doors manually by using them, then flipping four switches on a circuit breaker. Doors may be closed in: Communications, Electrical, Laboratory, O2, Office, Storage, and Weapons.

Polus also contains Decontamination, which functions similarly as on MIRA HQ. The doors here are typically closed, but may be opened by using the doors themselves, instead of a button near them.

The Airship, like Polus, has manual doors that must be opened if they were closed through Door Sabotage. However, instead of switches, the doors are opened by swiping a card in a similar fashion to Swipe Card. Doors may be closed in: Brig, Main Hall, Medical, Records, Vault, and the hallway linking Cockpit, Communications, Armory and Engine Room.

The Airship also have doors in Lounge, which can be opened by players using the doors, similar to the Decontamination doors on Polus. There are four doors that links to the stalls.

The Airship also has special doors in Electrical which are either opened or closed randomly in a way that allows all the rooms in Electrical to be accessed regardless. These doors remain closed until the game ends and cannot be opened in any way.

A door in Balcony on MIRA HQ.

A door in Decontamination on MIRA HQ.

A door in Lounge on The Airship.

A door in Electrical on The Airship. 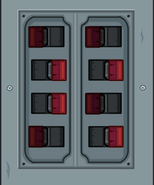 The circuit bar that is used to unlock a door on Polus.

The card swiper used to unlock a door on The Airship.

An Impostor trapping Orange in a room in the How to Play guide.

The card that is used to unlock a door on The Airship.

The wallet in which the card is kept.