Among Us Wiki
Register
Don't have an account?
Sign In
Advertisement
in: Locations, Mods/Locations, Polus locations
English

View source
watch 02:46
The Quarry - The Loop
Do you like this video?
Play Sound
This article is for the location on Polus.
For the pre-game lobby, see Lobby.

Dropship is a location in Among Us on Polus and used as the setting of the lobby.

On Polus, Dropship acts as the spawn location. It is a dead-end located at the top of the map, slightly left from the middle, and leads directly outside. There is a door in the back with task panels on the left and right, which are used for Chart Course and Insert Keys, respectively.

Dropship is used as the lobby while waiting for players to join. It has two large metal crates and a single small one. There is a laptop on the small one, which lets the host modify the game options. To the right of the laptop is a panel for the wardrobe, which allows players to change their cosmetics. The lobby does not have anything near the seats, but two tasks appear when the lobby transforms into Dropship on Polus.

The options of the game have taken the place of the task list. These show players the different parts of the game. Each attribute can be modified by the host at any time.

Dropship can be seen in the launch trailer for MIRA HQ, in which it is approaching the building. Dropship is located at the top of Launchpad when the round begins, which is also where players start. 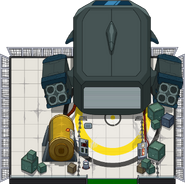 Dropship can be seen at the top of Launchpad on MIRA HQ. 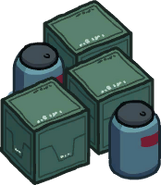 The storage boxes outside and to the left of Dropship. 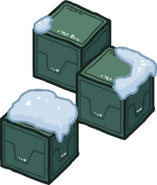 The storage boxes outside and to the right of Dropship. 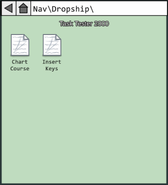 The Task Tester 2000 interface of Dropship.