Voting
Ejection is the final stage in an emergency meeting and occurs when a player in Among Us receives the most votes during an emergency meeting. The ejected player then becomes a ghost and, depending on the game's options, their role may be revealed and the remaining amount of Impostors is shown.

Ejection occurs when the voting period in an emergency meeting is over; the player with the most votes will be ejected. With Confirm Ejects enabled, the game will display the player and whether or not they were The/An Impostor, along with how many Impostors remain with the format,

If Confirm Ejects are toggled off in the game's options, the game will state "<Player> was ejected." with no information about their in-game role or how many Impostors remain. If either the highest number of votes are to skip the vote, there is a tie in the voting, or no one voted, no one will be ejected, and the message appears as "No one was ejected. (Skipped/Tie)", along with how many Impostors remain if Confirm Ejects are enabled. A tie can also occur between a player and the skip option.

Once a player is ejected, they are considered dead. Similar to players who were killed, they are still allowed to roam the map as a ghost. Their pets will stay near the spawn point, except on The Airship, in which case they remain where they were at the time of the emergency meeting that lead to their owner's ejection, and will act as if their owner was killed there.

Additionally, when a player is ejected, their clothing may have visual changes. For instance, the doctor skin would be more spread out than usual.

On The Skeld, the ejected player is shot out of the ship's airlock and is shown spinning/floating through space. It is unknown where the ship's airlock is, but it is heard at the start of the ejection. The sound is panned mostly to the left channel.

On MIRA HQ, the ejected player is shown falling from the sky into a mass of dark clouds.

On Polus, the ejected player is shown falling from a cliff into a pool of lava, which is likely the pool shown Outside. If Confirm Ejects are on, Crewmates who are ejected will stick their hand out of the lava, as if they are calling for help, while Impostors who are ejected will give a thumbs up. If Confirm Ejects are off, the ejected player will splash into the lava, not showing any unique animation.

On The Airship, the ejected player is shown falling from the sky full of clouds. It is a reference to the Henry Stickmin game Fleeing the Complex, specifically the ending The Betrayed where Reginald Copperbottom betrays Henry and tosses him off the Airship (the ending music even playing). Players will stick out their hand regardless of their role. 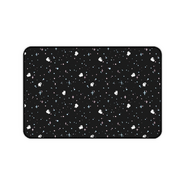 The sprite of a player as they are ejected.

A character's hand, shown when a Crewmate is ejected into the lava on Polus (and confirm ejects are on), and when a player is ejected on The Airship.

A character giving a thumbs up, shown when An Impostor is ejected into the lava on Polus (and confirm ejects are on).

The ejection sprite (Blue) at the top of an image of color popularity rankings.

An ejected Green character in the background in a promotional image for the Innersloth Online Artist Alley.