Among Us Wiki
Register
Don't have an account?
Sign In
Advertisement
in: Tasks, Short tasks, Long tasks, Polus tasks
English

2
Fix Weather Node is a short or long task in Among Us, featured on Polus.

The player has to go to one of six weather nodes placed Outside (Node_CA, Node_TB, Node_IRO, Node_PD, Node_GI, and Node_MLG) and move their cursor through a randomly generated maze, starting at the top left and ending at the bottom right. If the player releases the node or goes into a dead end, they have to restart the maze from the beginning.

The location of each node is as follows:

Once the end of the maze is reached, the player must go to Laboratory and switch on the weather node that was fixed.

The panel used to fix the node in Fix Weather Node's first stage.

Stage 1 of Fix Weather Node on the Nintendo Switch edition. 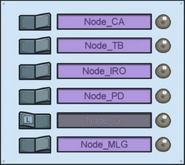 Stage 2 of Fix Weather Node on the Nintendo Switch edition.