12+ (before version 2021.2.21)
Fortegreen is a color that cannot be selected through the wardrobe. The color is assigned to each player shortly before they connect. Players as Fortegreen have the name "???", as the color was used for connecting players before the 2020.9.22 update. Players may see the name or color for a split second when another player joins. As of version 2021.2.21, Fortegreen's color ID was removed from the code so it cannot be accessed that way in most places, causing the player to revert to the lowest color ID. The exception is the accounts card and the wardrobe on the main menu. 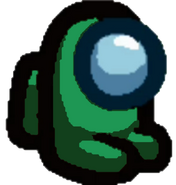 An extremely buggy lobby prior to version 2021.6.15, featuring two Reds and two Fortegreens.

A buggy lobby with four Fortegreens.

The difference between Fortegreen on the left and Green on the right.

The user interface after pressing the emergency button as Fortegreen in Freeplay.

The emergency meeting interface after pressing the emergency button as Fortegreen in Freeplay.

The customize menu in the lobby as Fortegreen, showing them wearing the military skin. 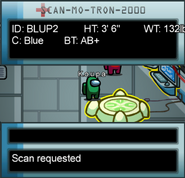 Fortegreen appearing as Blue during Submit Scan in Freeplay. 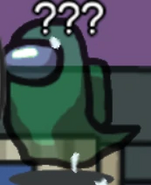 Fortegreen using the emergency button in a highly bugged game.

Fortegreen with a Red Mini Crewmate.

Black with a Fortegreen Mini Crewmate found in a buggy lobby.

White with a Fortegreen Crewmate hat and Mini Crewmate found in a buggy lobby.

The character shown as Fortegreen in emergency meetings.

Fortegreen chatting in a buggy lobby.

A Crewmate of a color resembling Fortegreen watching Cyan trying to figure out The Airship's release date. 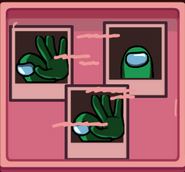 The Fortegreen photos in Develop Photos before version 2021.6.30.

Fortegreen's Mini Crewmate spinning in the loading screen of the main menu, introduced in version 2021.3.31.