Gap Room is a location in Among Us on The Airship. It contains two ladders and the moving platform, which can be used to cross the room's large gap.

On the left side of Gap Room, there is a ladder which goes up to Meeting Room, and a door which leads to Brig. Next to the ladder is a keypad, and further down on the same side is a vent, which leads to the lower part of the right side in the Gap Room and the upper vent in Main Hall. On the right side, there is a Download Data panel and a door that leads to Records. There is also a ladder going down, leading to a keypad, a panel to Accept Diverted Power, one of three panels used to resolve Fix Lights, and a vent that leads to the left side of the Gap Room and the upper vent in Main Hall. Finally, in the middle of the room, there is a large gap, above which is the moving platform that can be used to cross it.

The keypads at either side of the room are used to resolve Avert Crash Course.

There are two interconnected vents in Gap Room. They are connected to the upper vent in Main Hall.

Impostors can Sabotage Gap Room, causing Avert Crash Course. To resolve it, players must enter the backup code on the keypads on either side of Gap Room within a limited amount of time before it resets. Players have 90 seconds to resolve this Sabotage. 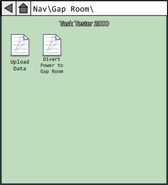 The Task Tester 2000 interface of Gap Room on The Airship.