Green (nicknamed Dark Green by fans) is one of the colors in Among Us that the player can customize. Alongside Red, Green appears to be a mascot of the game, as they appear on several posters and cameos several times throughout the game. Green also seems to be a close acquaintance with Orange.

Orange, Green, and Cyan, hinting that Cyan might be the child of both Orange and Green 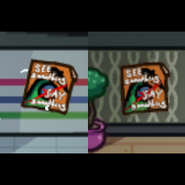 Green depicted as an Impostor on two posters on the Polus map, along with the text "SEE something SAY something"

Green with a Hat

The "SEE something SAY something" poster up close.
Add a photo to this gallery

Retrieved from "https://among-us.fandom.com/wiki/Green?oldid=25199"
Community content is available under CC-BY-SA unless otherwise noted.