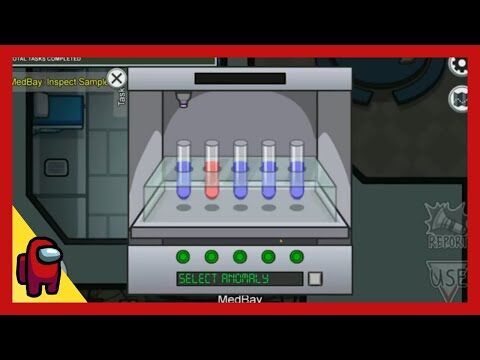 Inspect Sample is a long task in Among Us, completed in MedBay on The Skeld and Polus.

When a player starts Inspect Sample, a machine holding five test tubes will appear. The player must press the small green button near the bottom-right corner of the machine. Once the button is pressed, the machine will quickly dispense a liquid into each test tube. The top of the machine will then read "ETA 59". The Crewmate can then close the task window, as the counter will continue to decrease.

After 59 seconds have gone by, including time spent in emergency meetings, the player will need to return to the machine to complete the task. They must press the green button below the red-colored sample.

If done successfully, the top of the machine will read "THANK YOU!" and the bottom will read "TEST COMPLETE".

If one of the four blue samples are selected, the machine will read "BAD RESULT", the green buttons will flash red, and the whole process will need to be repeated.

Retrieved from "https://among-us.fandom.com/wiki/Inspect_Sample?oldid=77151"
Community content is available under CC-BY-SA unless otherwise noted.