Among Us Wiki
Register
Don't have an account?
Sign In
Advertisement
in: Newcomers, Abilities, Testing needed, Impostor abilities

Kill the nearby Crewmate.
Kill is an ability in Among Us, exclusive only to living Impostors. Killing is one of the main abilities Impostors have to defeat Crewmates and become victorious.

Impostors use this ability for killing Crewmates, turning them into ghosts (or ending the game, if the Crewmates no longer have a voting majority as a result). The kill cooldown ranges from 10 to 60 seconds, depending on the game options. Upon spawning in for the first time in the match, The Impostor's kill cooldown starts at 10 seconds from the beginning of the game. After an emergency meeting or The Impostor killing a character, the cooldown will change to that of the in-game options. The kill distance may be short, medium, or long, depending on the game's options. However, the kill cooldown pauses when The Impostor is in a vent; uses a moving platform, a ladder, Admin, Security, Doorlog, or Vitals; resolves a Sabotage; opens the emergency button interface; or opens the Customize menu in Freeplay, and will only resume when such actions are stopped.

While killing someone, The Impostor will teleport towards the target, slicing their body in half and leaving only a bone sticking out. The now-dead Crewmate will become a dead body, which Impostors or other Crewmates can report. Dead bodies will remain on the map until an emergency meeting is called, either by reporting a body or using the emergency button.

Kill cannot bypass through walls or obstructions, as it works for a given distance in a straight line of sight, such that if there is an object between the Crewmate and Impostor, the kill option will be deactivated. Some objects do not count towards this such as doors.

When An Impostor comes close to a Crewmate, a red outline marks the victim. The distance from which the red line starts depends on the options. When pressing the kill button, the victim's body is split in the middle accompanied by a blood splatter, with the entire upper half disappearing, and the dead body wobbles to the ground, with a single bone sticking out. This is the time for The Impostor to flee, hide in a vent, or report the body to try to accuse and eject Crewmates or feign innocence. Impostors cannot kill other Impostors.

In the Crewmate's point of view, intense violin music starts to play while a short animation flashes on the screen, which consists of one of five ways An Impostor can kill the victim: snapping the victim's neck, stabbing them with a knife or a pointed tongue, punching and shooting them with a gun, or shooting a laser which incinerates their head (only if The Impostor has the Right Hand Man skin equipped, in which case this animation will show and not any of the others). Regardless of which animation shows, their body will show up split in the middle, exposing their bone on any other player's view and turning the Crewmate into a ghost. The controlled character cannot be killed in Freeplay.

An animated clip of An Impostor snapping a Crewmate's neck.

An animated clip of An Impostor repeatedly stabbing a Crewmate with a knife.

An animated clip of An Impostor punching a Crewmate and shooting them with a pistol.

An animated clip of An Impostor stabbing a Crewmate with their sharp tongue.

An animated clip of An Impostor disintegrating a Crewmate with the laser in their left eye.

The sprite for the blood that appeared when a Crewmate is killed.

A Crewmate's body having just been killed.

A Crewmate after being killed.

A collection of kill animation sprites.

The background that appears for the kill animation from the victim's point of view.

A Crewmate during the gun kill animation.

A Crewmate during the tongue kill animation.

A Crewmate during the knife kill animation.

A Crewmate during the neck snap kill animation.

A Crewmate during the laser kill animation. 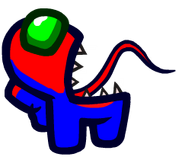 An Impostor showing its sharp teeth during the tongue kill animation.

Yellow's dead body in How to Play.

A Crewmate with a pet being killed.

The gun that Impostors use during the gun kill animation.

The knife that Impostors use during the knife kill animation.

Coral killing Olive with a knife in a promotional image sent on Discord.