Among Us Wiki
Register
Don't have an account?
Sign In
Advertisement
in: Locations, Mods/Locations, MIRA HQ locations, Polus locations
English

Laboratory is a location in Among Us on MIRA HQ and Polus.

On MIRA HQ, Laboratory is located across from Reactor, and past Decontamination. It features a one-way window that can only be looked through on the hallway side. Along the top wall are panels for Fix Wiring, Accept Diverted Power, and Assemble Artifact. There is also a vent in the top right corner, directly connected to the vents in Reactor and Decontamination. At the bottom, there is a table used for Sort Samples.

Laboratory on Polus is a large room encompassing several smaller rooms. At the left entrance is a long hallway that connects two sections. The left-most section is an exposed area with a drill used in Repair Drill. The right-most section is the weather station that features a television with the weather forecast on it. In addition, there are two panels along the top wall used for the Record Temperature and the second stage of the Fix Weather Node tasks.

At the end of the hallway is the central lab room, which features a lab table in the center and a telescope for Align Telescope. On the far right is MedBay, which features hospital beds and a scanner in the back, for Submit Scan, as well as a panel right outside MedBay for Inspect Sample.

On MIRA HQ, there is a vent in the top-right corner that directly leads to Reactor, Decontamination, and Office.

On Polus, there is a vent in one of the bathroom stalls that directly leads to the vent outside Laboratory against the wall. 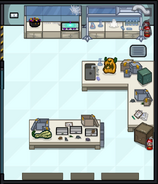 Laboratory on MIRA HQ during Halloween.

Laboratory as shown in promotional artwork for Polus. 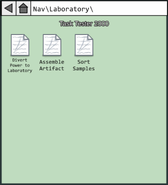 The Task Tester 2000 interface of Laboratory on MIRA HQ. 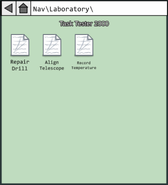 The Task Tester 2000 interface of Laboratory on Polus.