View source
watch 02:46
The Quarry - The Loop
Do you like this video?
Play Sound
This article is for the pre-game lobby.
For the location on Polus, see Dropship.
Alternatively, for the the location which contains the dropship on MIRA HQ, see Launchpad.

The lobby is where players spawn when they join a game in Among Us.

The lobby is a small spaceship with five seats at the top of each side, which are the spawning locations for players, and an entrance door at the top dividing the two sets of seats. In addition, there are two large, greenish-teal crates in the lower half and a smaller crate, on which there is a laptop the host can use to edit the game's options. There is also a panel that players can use to access their wardrobe and change their cosmetics.

The lobby is near-identical to Dropship on Polus. The only differences are the absence of the three crates and the inclusion of Chart Course and Insert Keys. This ship can also be seen from the outside in Launchpad on MIRA HQ, although it is inaccessible.

The players can see the options set by the host for the game in the upper left corner and the room code at the bottom middle of the screen. The number of players in the lobby is displayed to the right of the room code. A button to the left of the room code says whether the room is public or private. The host can change this by pressing the button. The host will also see a Start button at the bottom of their screen. It will be translucent and unusable if there are fewer than four players. If the game starts at four players, there will be a warning saying that it will not be fun to play and very difficult for the Crewmates to win.

When players join the lobby, the seats they appear in are in the ascending order of when they joined the lobby. The 11th to 15th players will join in the 1st to 5th seats since there are only ten seats. If someone leaves, the next player to join will appear in the leaver's seat. The players also join with an animation that involves the character glowing white while slowly becoming the player. Once the transformation has been completed, they jump out of their seat and can freely move around in the lobby. When the player joins, they have the same cosmetics and color as the last round that they started. If said color is already taken, the player's color will be changed to the next available one. If a player joins with a name identical to one already in the game, players with matching names after the first to exist in the same lobby will be numbered in the order they joined.

An older version of the lobby.

A glitched lobby with the characters in a black screen.

The button used to get back to the lobby after a game.

The button used to exit a lobby after a game. 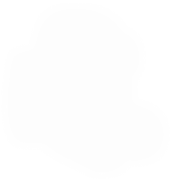 A player spawning into the lobby. 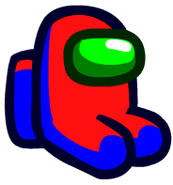 The game asset of a player spawning into the lobby.