This article is a stub. You can help the Among Us Wiki by expanding it.

This article is about upcoming Among Us content and will be updated frequently.
English

Shhh!
This article is about upcoming Among Us content and will be updated frequently. If you have information, please add it now.
Note: Please do not add your own hypothesis to this article; confirm the source of the information you added. Leaked information that was not intended to be released is also not allowed.

The Airship
Map 5 is an upcoming fifth map for Among Us. It was initially announced at the Summer Game Fest on June 10, 2021.[1] Nearly nothing is known about this map yet apart from its planned release date in 2022.[2]

Innersloth announced a fifth map as one of its planned additions into the game during the Summer Game Fest event on June 10, 2021, but nothing was shown apart from an unknown object.[3] A teaser featuring Pink was also released on Innersloth's Among Us roadmap.

On January 17, 2022, when Innersloth revealed their roadmap for 2022, the developers confirmed that Map 5 was still in development despite it being unintentionally omitted from the roadmap.[2] 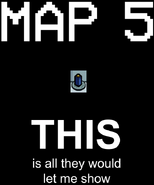 Another teaser of Map 5.