Among Us Wiki
Register
Don't have an account?
Sign In
Advertisement
in: Locations, The Skeld locations, MIRA HQ locations, Polus locations
English

View source
watch 02:56
Raise a Floppa - The Loop
Do you like this video?
Play Sound
This article is for the location on the first three maps.
For the similar location on The Airship, see Medical.

MedBay is a location in Among Us on The Skeld, MIRA HQ, and Polus.

When near MedBay in The Skeld or MIRA HQ, players will hear the sound of a heart-rate monitor steadily beeping. This sound gets louder if players move towards the scanning pad.

On The Skeld, MedBay is a medium-sized room that contains a vent, a scanner, and four hospital beds. It houses three tasks, and its vent leads to the vents in Security and Electrical.

On MIRA HQ, MedBay is a medium-sized room that contains a scanner and seven futuristic hospital beds. It houses three tasks and a vent that directly leads to Locker Room and Balcony.

On Polus, MedBay is a medium-sized room that is only mentioned in the task list and the Task Tester 2000. Otherwise, it is encompassed by Laboratory. It contains a scanner and four hospital beds. The beds look like they have a table next to them. It also contains two tasks.

Impostors can Sabotage the MedBay doors on The Skeld, closing them for ten seconds. This can be useful to lock and hinder Crewmates from completing tasks. This door closing can also aid An Impostor using a vent to kill someone in Electrical or Security by hiding their crime.

Impostors can close the doors in Laboratory in Polus but Crewmates can still go there from Specimen Room via Decontamination.

On The Skeld, there is a vent in the bottom-left corner of MedBay that leads to Security and Electrical. Its most common usage is traveling through a vent entered in Electrical, but entering the vent in MedBay can be useful.

On MIRA HQ, there is a vent at the bottom of MedBay that connects directly to Balcony and Locker Room. 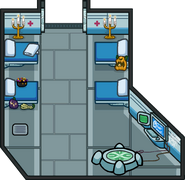 MedBay on The Skeld during Halloween.

MedBay on MIRA HQ during Halloween. 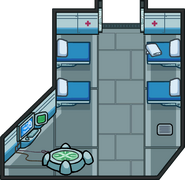 MedBay on The Skeld during April Fools. 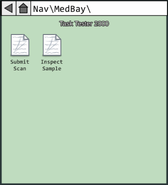 The Task Tester 2000 interface of MedBay on The Skeld. 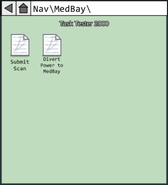 The Task Tester 2000 interface of MedBay on MIRA HQ. 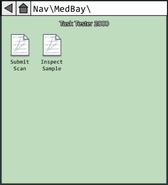 The Task Tester 2000 interface of MedBay on Polus. 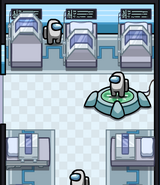