View source
watch 02:46
The Quarry - The Loop
Do you like this video?
Play Sound
This article is for the location on The Airship.
For the similar location on the first three maps, see MedBay.

Medical is a location in Among Us on The Airship.

Medical is divided into two sections. The right section (which is presumably a waiting room) has several chairs; a couple of tables - one with two water dispensers, a stack of paper cups, and scattered magazines on and around it - and the other table with a magazine on top of it as well; and the Empty Garbage task. The left section is C-shaped and is larger than the right section. It contains a panel for Download Data, a weighing scale, and two beds - with the Vitals monitor located in between them.

There are two exits to Medical. One at the end of the right section, leading up to Cargo Bay; the other at the left side of Medical, leading to Electrical. Both doors can be Sabotaged.

The left area of Medical shown in a teaser. 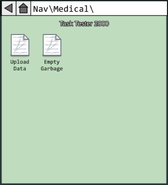 The Task Tester 2000 interface of Medical on The Airship.