Among Us Wiki
Register
Don't have an account?
Sign In
Advertisement
in: Locations, The Skeld locations, Polus locations
English

View source
watch 02:56
Raise a Floppa - The Loop
Do you like this video?
Play Sound
This article is for the location on The Skeld and Polus.
For the location on MIRA HQ, see Greenhouse.
Alternatively, for the Sabotage, see Oxygen Depleted.

O2 is a location in Among Us on The Skeld and Polus.

On The Skeld, O2 is a small room located towards the map's top-right corner, below Weapons. It features three short tasks and one of the number pads to resolve Oxygen Depleted. It appears that a plant is inside the box with the number pad, possibly helping produce oxygen to the ship. To the right of O2 is a camera, which also captures the entrance to Navigation.

On Polus, O2 consists of three rooms, two medium-sized and one small - and is located above Boiler Room. The top-left room contains the first stage of the Upload Data task, the Monitor Tree task, and a vent. The main room contains the Empty Garbage and Fix Wiring tasks, and the small room contains the Fill Canisters task.

On Polus, O2 contains one vent in the tree room that is interconnected with a vent Outside and in Electrical. The vent Outside is west of Communications.

On The Skeld, Impostors can Sabotage O2, starting the Oxygen Depleted Sabotage. To solve this Sabotage, living players must insert a code written on a yellow sticky note to the right side of the number pads in O2 and Admin within 30 seconds. The code in O2 is identical to the code in Admin.

Although Polus contains an O2 room, there is no Oxygen Depleted Sabotage.

On Polus, Impostors can Sabotage the doors of O2, locking living players inside. However, living players can open doors by flipping four disabled switches. As with other locations on Polus, these doors do not affect ghosts.

O2 on The Skeld during Halloween.

O2 on The Skeld during April Fools. 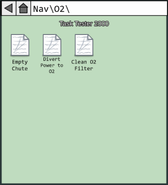 The Task Tester 2000 interface of O2 on The Skeld. 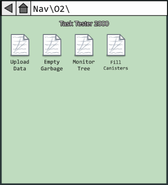