Among Us Wiki
Register
Don't have an account?
Sign In
Advertisement
in: Locations, Mods/Locations, Polus locations, The Airship locations
English

Outside is a location in Among Us on Polus and The Airship.

Outside is the planetary base's outer area, being located practically from the right exit of the Office, with a lava pit, several pilasters of climatic modules, among other things. A metal plank leads out to the lava used when a player is ejected. However, while playing, players cannot fall into the lava. This area can also be seen through the security cameras.

On The Airship, there are two Outside locations: one accessed from Viewing Deck, and another from Security. From Viewing Deck, Outside is a small, square balcony with a wooden plank extending from the balcony. From Security, Outside is a larger balcony with stairs leading down to the right. At both locations, there is a panel for Upload Data, and The Airship's engine can be heard as clouds move by.

The Seismic Stabilizers are located Outside. There are two Stabilizers; one on the northwest of the map and one on the northeast. Like the Reactor Meltdown, two players must simultaneously place their hands on the panels at both locations to resolve the Sabotage, resetting the stabilizers. The Sabotage has only one minute to be fixed. If the Crewmates are unsuccessful, The Impostors win.

There are six vent holes located Outside, including: 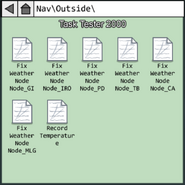 The Task Tester 2000 interface of Outside on Polus.

The area of Outside that can only be accessed by ghosts (note the dead body).