Among Us Wiki
Register
Don't have an account?
Sign In
Advertisement
in: Locations, The Skeld locations, MIRA HQ locations
English

View source
watch 02:56
Raise a Floppa - The Loop
Do you like this video?
Play Sound
This article is for the location on The Skeld and MIRA HQ.
For the location that serves a similar purpose on Polus, see Seismic Stabilizers.
Alternatively, for the the Sabotage that is fixed in this location, see Reactor Meltdown.

Reactor is a location in Among Us on The Skeld and MIRA HQ.

On The Skeld, Reactor is a room located in the corridor across from Security. It contains two vents, with the upper one connecting to Upper Engine and the lower one connecting to Lower Engine. While the room's Reactor typically glows blue, it will begin to glow red if Reactor Meltdown is happening, with paths to the handprint scanners lighting up. A fake Divert Power panel is shown but cannot be used.

On MIRA HQ, Reactor is connected to Laboratory. It contains a massive reactor with a claw that emits a laser, several computers, and two fingerprint scanners that are used to resolve Reactor Meltdown, similar to The Skeld. The room's Reactor also glows red during Reactor Meltdown. To reach Reactor, Crewmates must first go through Decontamination. A vent is located on the left below, allowing Impostors to enter without going through Decontamination. Several one-way windows can also be seen through from the hallway side of Reactor.

Impostors can Sabotage Reactor, starting Reactor Meltdown. Players are given 30 to 45 seconds to resolve the Sabotage; 30 seconds on The Skeld and 45 seconds on MIRA HQ. To resolve, two players must scan their hands at different stations simultaneously. If it is not resolved in the allotted time, The Impostors will win.

On The Skeld, there are two vents to the north and the south. These vents lead to Upper and Lower Engine, respectively.

On MIRA HQ, there is one vent in Reactor near the first stage of the Divert Power task. The vent leads directly to Laboratory, Launchpad, and Decontamination.

Reactor on The Skeld during Halloween.

Reactor on MIRA HQ during Halloween.

Reactor on The Skeld during the Reactor Meltdown Sabotage. 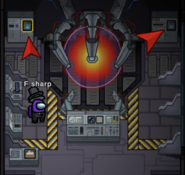 Reactor on MIRA HQ during the Reactor Meltdown Sabotage.

Reactor on The Skeld during April Fools. 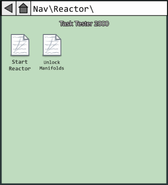 The Task Tester 2000 interface of Reactor on The Skeld. 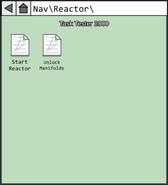 The Task Tester 2000 interface of Reactor on MIRA HQ.