View source
watch 02:46
The Quarry - The Loop
Do you like this video?
Play Sound
This article is for the option to report players' accounts.
For the ability, see Report.

Report is a feature in Among Us released alongside accounts and The Airship. The mechanic can be used to report players who are behaving inappropriately. To report, players can open the kick menu in chat, select the player to report, and click the report button. Reports are reviewed by a team, and bans may be temporary from 1 to 30 days, or permanent.

Kick, ban, and report in the lobby host's menu 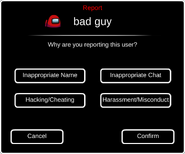