View source
watch 02:56
Raise a Floppa - The Loop
Do you like this video?
Play Sound
This article is for the location.
For the ability, see Security (ability).
Alternatively, for the object, see Camera.

Security is a location in Among Us on The Skeld, Polus, and The Airship.

On The Skeld, Security is a small room across from Reactor with a vent in the lower right corner. Above that is a desk and on the north side is a computer where players can access Security. When near Security, ambient sound is heard.

On Polus, Security is a tiny room linked with Electrical on the upper-left side of the map. It has a computer screen that allows access to Security. Although there are no vents in Security, a vent is at the exit of the room.

On The Airship, Security is a small room with two entrances. It consists of a monitor to use Security and a few computers; the rightmost one being a panel used for Rewind Tapes. At the bottom, there is an exit to a balcony, similar to Viewing Deck.

On The Skeld, there is a vent in the bottom-right corner. This vent connects to the vents in MedBay and Electrical.

Security contains the Security ability, which allows players to view different parts of the map through security cameras. The functions of the cameras vary by map. When a living player uses Security, a red light will blink on the security cameras for all players to see.

The Door Sabotage on The Skeld closes the doors in Security.

Security on The Skeld during Halloween.

Security on The Skeld during April Fools. 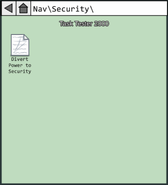 The Task Tester 2000 interface of Security on The Skeld. 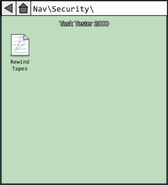 The Task Tester 2000 interface of Security on The Airship.