Among Us Wiki
Register
Don't have an account?
Sign In
Advertisement
in: Gameplay mechanics, Main menu sections, UX elements
English

View source
watch 02:46
The Quarry - The Loop
Do you like this video?
Play Sound
This article is for the local game settings.
For the lobby options, see options.

Settings is a UX element and section on the main menu, accessed by clicking the gear below How to Play and to the right of announcements. The settings also appear in the top-right corner on-screen within the lobby and during gameplay. They change certain aspects of the game, such as controls and sound volume.

The settings interface displays several game settings that the player can modify, such as interface language and controls. The available settings are split into three different tabs: "General", "Graphics" (PC only), and "Data".

Under the "General" tab, players may switch their controls. On mobile, the available options are "Joystick" and "Touch", while on PC, the available options are "Mouse" and "Mouse+Keyboard". On the Nintendo Switch edition, controls cannot be customized. Selecting "Mouse+Keyboard" on PC unlocks additional options to control whether the mouse controls movement and change the default keyboard bindings. Selecting "Joystick" on mobile unlocks an additional option to change the joystick size. The volume for sound effects and background music can be adjusted with sliders underneath the controls on all systems. Under the volume sliders is a "Censor Chat" button, which toggles a chat censor, and a "Friend & Lobby Invites" button, which controls whether the player can receive friend requests and lobby invites. If "Censor Chat" is enabled, certain words and phrases that the game deems inappropriate will be censored in the chat with asterisks, but if it is disabled it simply has no effect on the chat. Below the "Censor Chat" and "Friend & Lobby Invites" buttons are buttons for "Colorblind Text" and "Streamer Mode". If "Colorblind Text" is enabled, the colors each player is using is displayed over their character sprites as well as in the chat and during emergency meetings. If "Streamer Mode" is enabled, room codes are hidden in the lobby and are replaced with asterisks. The "Streamer Mode" button is unavailable in the mobile version of Among Us.

The "Graphics" tab is only available on the PC version of Among Us. Under the tab is a slider to adjust the game resolution, a button to switch between full screen and windowed mode, a button to enable or disable VSync, and a button to enable or disable "Screen Shake". When "Screen Shake" is disabled, the screen remains stationary during instances where it would normally shake, such as in a lobby. "Screen Shake" is disabled by default on other platforms and cannot be changed. The "Apply" button at the bottom is used to apply any changes made to the graphics settings.

The "Data" tab is only accessible when viewing the settings on the main menu. Under it, the player's language can be set, and a "Privacy Policy" button is shown below, which sends the player to Innersloth's privacy policy on their website. The language menu only affects interface, however. On mobile, there are also options to integrate Discord and Twitch accounts, which allows players to start a livestream on Twitch and advertise a game on Discord.

Below is a list of all the available languages. 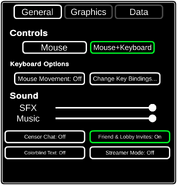 The "General" tab on the PC version. 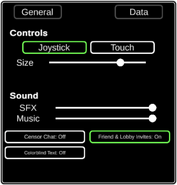 The "General" tab on the mobile version. 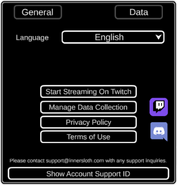 The "Data" tab on the mobile version.

The "General" tab on the Nintendo Switch edition's settings on the main menu. 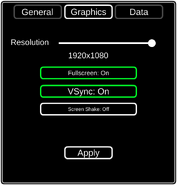 The "Graphics" tab in settings on the main menu. (PC only).

The "Data" tab on the Nintendo Switch edition's settings.
Español
Community content is available under CC-BY-SA unless otherwise noted.
Advertisement