Among Us Wiki
Register
Don't have an account?
Sign In
Advertisement
in: Locations, The Skeld locations, MIRA HQ locations, Polus locations
English

View source
watch 02:56
Raise a Floppa - The Loop
Do you like this video?
Play Sound
This article is for the location on The Skeld, MIRA HQ and Polus.
For the location that serves a similar purpose on The Airship, see Cargo Bay.

Storage is a location in Among Us on The Skeld, MIRA HQ, and Polus.

On The Skeld, Storage has large containers in the middle of the room, which only allow for movement around the room's walls. On the bottom left of the pile of containers, there is a red gas canister, which is used to refill the fuel can during the Fuel Engines task. It has three doors: up, which leads to Cafeteria, passing Admin; left, which leads to Lower Engine, passing Electrical; and right, which leads to Shields, passing Communications. In the bottom right corner of the room, there is a lever and a hatch where the garbage is flushed away for the second stage of the Empty Garbage task, which is a visual task.

On this map, Storage is located near Cafeteria. Inside the room is a bookcase which contains old materials, including the watering can, which is used for the Water Plants task. A Fix Wiring panel is located at the exit of the room.

Storage is a small, isolated room with only a few boxes and a red gas canister, which is once again used to refill the fuel can during the Fuel Engines task. There is also a hole there, which is connected to the holes in Office and the one near Communications. A window allows players to see both into and out of Storage depending on where they stand, located at the south of the room.

Impostors can close doors in Storage on The Skeld and Polus, locking people in and preventing them from doing tasks. On The Skeld, Crewmates must wait for the door to open; however, people can open the door by activating four disabled buttons on Polus.

On Polus, there is a vent in Storage that leads to Office and the outside of Communications. However, on The Skeld and MIRA HQ, there are no vents.

Storage on The Skeld during Halloween.

Storage on MIRA HQ during Halloween.

Storage on The Skeld during April Fools. 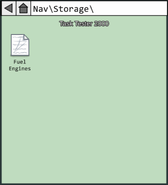 The Task Tester 2000 interface of Storage on The Skeld. 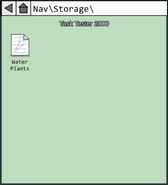 The Task Tester 2000 interface of Storage on MIRA HQ. 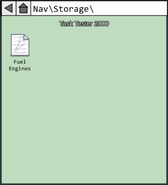 The Task Tester 2000 interface of Storage on Polus.