Upper Engine is a location in Among Us on The Skeld.

There is a vent in the upper-right corner of Upper Engine. This vent leads to the topmost vent in Reactor.

Impostors can temporarily close the doors via Door Sabotage, locking players and hindering them from running tasks elsewhere or leaving the room. Impostors can still use the vent to exit to Reactor, however. 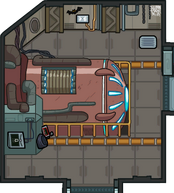 Upper Engine on The Skeld during Halloween.

Upper Engine on The Skeld during April Fools.

The Task Tester interface for the Engines on The Skeld.
Retrieved from "https://among-us.fandom.com/wiki/Upper_Engine?oldid=90284"
Community content is available under CC-BY-SA unless otherwise noted.