Hello, I am Chikorita Lover, an administrator of the Among Us Wiki. I first joined the wiki on September 20, 2020, and was promoted to rollback on November 11, 2020. After applying to be a content moderator, I was granted the role on December 20, 2020, and was promoted to administrator on January 25, 2021. If you have any questions regarding the wiki, feel free to ask on my message wall, and enjoy your day.

I joined the Among Us Wiki back in September 2020 when I first got into Among Us. I had been an active Fandom user, particularly on the Stikman Wiki and Undertale Wiki. After playing a little bit of Among Us, I searched for the Among Us Wiki and found this site.

My first edit was on Fuel Engines as I had noticed many glaring flaws, including italicization of map names, second-person narrative, and whatnot. No Manual of Style was existent, but I knew the things mentioned above were definitely problematic. I eventually joined the Discord server, and over time, proposed the idea of a Manual of Style. I eventually got to write the original version, and was also promoted to rollback.

Here we are today, with me being an administrator! I did not think I would ever get this far.

Please do not be offended if you are not listed! I may have just not written your entry yet ;)

Crystallized Petri Dish, also known as Petri, is another user here on the Among Us Wiki. They are an absolutely great rollback, getting to vandalism as soon as any is spotted. Great person to talk to on the Discord server as well, and definitely deserve to be a content moderator.

Caburum is one of our bureaucrats, and does a great job at his position. Making big decisions and managing the entire wiki and Discord server are his strong points.

Helenaandjames, also known as James, is a content moderator here and definitely deserves said role. While I was initially annoyed with him when he was new, I grew to enjoy and understand him more, and am glad he is currently on the staff team!

Thundercat3 is another content moderator here, and too deserves it. He is quick to get to vandalism, just like Petri, and is a great editor in general. Just like everyone else here, I enjoy talking with him on Discord!

Shosoul is another of our bureaucrats, taking care of the back end of things. He is most notable for managing the Among Us Wiki Bot, which is very effective here at the wiki. Along with Caburum, he manages the Discord server very well and is great at making decisions!

Although no longer on the staff team, RoseHonaku987 was an amazing discussions moderator here. Always being friendly and being great at moderating the discussions, they was a great member of the staff team.

Also no longer on staff, Starr was an amazing administrator here. They knew how to handle any situation on the wiki and server very responsibly, and were also great to talk with on the Discord server. 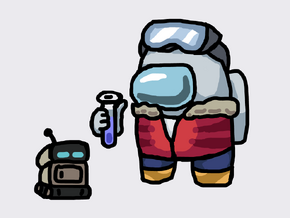 Cadet is a MIRA crew member who primarily works within the company's headquarters or on Polus. They are interested in chemistry, geology, and engineering, and have a robot buddy. Cadet's robot was created by Cadet themselves and has a special compartment for storage purposes.

Cadet's favorite locations are Laboratory and Specimen Room, but they also enjoy Electrical and MedBay. They wear ski goggles and winter gear, and have a pet robot.

Cream is an optimistic MIRA crew member who works in many of the company's locations. They are highly interested in biology, love cosplaying as a banana, and have a squig buddy. Cream's squig is quite shy and prefers staying close to Cream.

Cream's favorite locations are Greenhouse and O2, but they also enjoy Balcony. They wear a banana hat and MIRA hazmat suit, and have a pet squig.

Retrieved from "https://among-us.fandom.com/wiki/User:Chikorita_Lover?oldid=76521"
Community content is available under CC-BY-SA unless otherwise noted.

Ranked #8
on this wiki