Vault is a location in Among Us on The Airship.

Vault is a large, circular room divided into four sections. It is located near the top left of the map. Two of these sections have two mannequins each, while the other two have gold and artifacts in them, being a golden gun and a red halo energy sword, respectively. In the middle of all the sections, the Romanian Ruby from The Henry Stickmin Collection is on display, used for completing the Polish Ruby task. There is a vent on the left, which leads directly to the one in Cockpit and a camera attached to the door on the right, which leads to Brig.

Vault contains one vent that is interconnected to the vents in Cockpit and Viewing Deck. 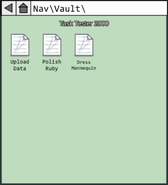 The Task Tester 2000 interface of Vault on The Airship.

A tweet by Innersloth describing four different paintings in Vault on The Airship.