Among Us Wiki
Register
Don't have an account?
Sign In
Advertisement
in: Newcomers, Abilities, Mods/Abilities, Impostor abilities

View source
watch 02:53
GTA: The Criminal Enterprises - The Loop
Do you like this video?
Play Sound
This article is for the ability.
For the object, see vent (object).
Alternatively, for the task, see Clean Vent.

Lets the player jump in or out of vents.
Vent is an ability in Among Us, only usable by living Impostors or Engineers as a way to travel and hide around the map.

When An Impostor or Engineer is in close proximity to a vent, the vent button becomes usable. If clicked, an animation shows the player jumping into the vent, an action visible to any other players who can see the vent in their vision. The vent opening and closing can be seen even outside of vision on The Skeld and MIRA HQ, but the player who vented cannot be seen. Once in the vents, arrows are displayed, pointing in the directions of connected vents. Hiding in the vents pauses The Impostor's kill cooldown until exited.

Engineers are also able to travel through vents. However, depending on the lobby options, they can only stay in the vent for a limited time and must wait some time for the ability to become available again. This is because it is impossible to be killed while in a vent. Engineers cannot travel through vents while Comms Sabotaged is active.

Impostors and Engineers will be prevented from using or travelling to any vent that is in use by a Crewmate completing Clean Vent, and anyone that is currently in the vent will be forced out of it once a Crewmate begins the task. Engineers with Clean Vent cannot enter the vent they have the task in until they complete the task. If an Engineer or Impostor enters a vent that is connected to a vent a Crewmate is using to complete Clean Vent, the arrow pointing to that vent will be marked with a red X.

A vent on The Skeld, MIRA HQ and The Airship.

A vent on Polus.

The arrow that is displayed when a player is in a vent. 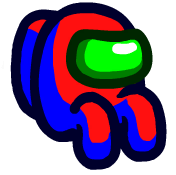 A player's base template when hopping in or out of a vent.